What do you do when you need a specific type of in-pavement fixture for a vital part of your airport, but you can no longer procure the fixture you need? You work with a determined, innovative manufacturing partner that perseveres until a satisfactory solution is found to resolve your problem now and in the future. Chicago O’Hare International Airport found itself in just such a predicament a few years ago.

Chicago O’Hare airport has two taxiway bridges –- Alpha and Bravo — that are essential to the safe and smooth operation of its airfield. As shown in the overview of Chicago’s airfield, without the two bridges aircraft have to circle around the terminal before unloading passengers, increasing travel times, fuel consumption and safety concerns.

were built more than 20 years ago, the builder installed in-pavement fixtures in a very shallow base (about 1.25 inches deep) and ran conduit through the bridge and underneath it to electrical boxes. This was done because the bridges are heated during the winter using oil-filled pipes to prevent snow and ice buildup.

The problem occurred when the electronics module for the original in-pavement fixture was no longer available. In addition, the fixture had an inherent design flaw –- the electronics module in the top was subject to leaks and troublesome for maintenance staff. And, the oil-filled pipes used to heat the bridge prevented any modification to the depth of the shallow base. Chicago’s airfield maintenance staff could not simply replace the outdated fixture with what was currently available in the marketplace. Some twenty years after the bridges had been built, Chicago was faced with a serious dilemma.

The overview of Chicago O’Hare’s terminal and bridge area illustrates the traffic flow problem the airport faced if the bridges had to be shut down for any length of time. The two bridges are marked in blue, the route the planes would be required to take without access to the bridges is shown in red, and the shorter route planes could use with the bridges functioning properly is shown in green. The result: reduced taxiing time, faster turnarounds and increased safety.

The fixture that was originally installed in the bridges shown above became too difficult to maintain and replace. Chicago had asked ADB SAFEGATE to find replacement parts, which had become almost impossible, so the company suggested an alternate solution: a modified LED.

Before ADB SAFEGATE modified its in-pavement LED fixture to solve O’Hare’s shallow base problem, the original fixtures were so dim there appears to be a gap in the bridge lights under the plane.

ADB SAFEGATE, who had been enlisted to try to find spare parts for the old fixture for Chicago, soon suggested a better, more permanent solution for the bridges. ADB SAFEGATE proposed a modified in-pavement LED taxiway centerline fixture that would fit the existing shallow bases and be completely waterproof to address maintenance issues. Pleased to have a manufacturer offer to develop a solution, Chicago worked with ADB SAFEGATE to develop an LED fixture that would meet their needs.

Due to the height of the existing conduit in the shallow base can and the very limited overall fixture depth, ADB SAFEGATE removed the bottom pan of its standard taxiway centerline LED fixture and developed a method to relocate the electronics to enclosures located underneath the bridges, leaving only the LED module in the fixture. The fixture was then sealed with a potting compound to prevent water leakage.

How to link the LEDs to the electronics presented its own difficulties, however, because a typical L-823 fixture connector could not be used. Instead a much thinner, abrasion-resistant cable was connected to the LED module and sealed into the top cover with the potting compound. Two hundred feet of cable was needed to connect the LED fixtures to the electronics (shown below), now located below the bridge in a watertight aluminum enclosure. The cable was fed through the bridge to the watertight enclosure underneath. Each enclosure contains 12 electronic boards with each board powering two interleaved LED fixtures. The L-830 isolation transformers for the fixtures are located in an adjacent watertight enclosure underneath the bridge. The L-830 isolation transformers are 6.6A, 30/45W and were sized to power two LED fixtures plus the secondary wire load (which was up to 200 feet for each fixture).

ADB SAFEGATE supplied a total of 46 modified taxiway centerline LED fixtures for Chicago O’Hare’s Alpha and Bravo bridges along with eight spares. The fixtures, installed in September of 2007, went in without a hitch and have been operating successfully. 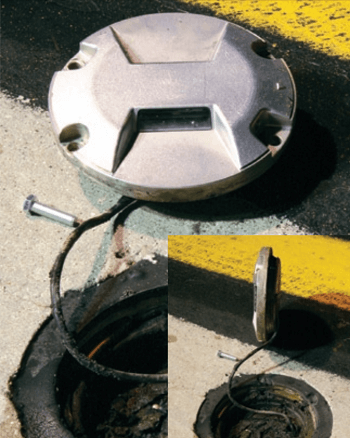 To fit the shallow bases already installed in Chicago’s bridges, ADB SAFEGATE removed the electronics that are normally installed in the bottom pan, leaving only the LED module in the top cover. LED fixtures can last more than 150,000 hours under actual operating conditions, resulting in a significant reduction or even elimination of ongoing maintenance costs and periodic re-lamping issues.

Up to two-hundred feet of stainless steel, abrasion-resistant cable was fed through the bridge to the watertight enclosure underneath. Each enclosure contains 12 electronic boards with each board powering two LED fixtures. The isolation transformers for the fixtures are located in an adjacent watertight enclosure.

ADB SAFEGATE offers one of the most extensive product and service portfolios, where the airfield, gate, tower and terminal are the foundation for fully integrated solutions to support airport development and optimize operational procedures.

With more than 1,200 employees, ADB SAFEGATE serves more than 2,500 airports in more than 175 countries, from the busiest and largest like Atlanta, Beijing, Dubai, Heathrow, Charles De Gaulle, Frankfurt, Istanbul, New Delhi and Changi to fast-growing airports across Asia and Africa